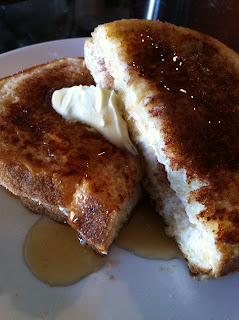 THINK CINNAMON BUN MEETS FRENCH TOAST! This is super easy to make for one and perfect for a late night sweet craving! The sprinkled cinnamon-sugar on the outside of the soaked bread caramelizes and gives this french toast extra crunchy goodness.

Heat a pan on medium heat.

In a bowl or dish (that is large enough to soak the bread in) whisk together the egg, milk, and vanilla.

Spread cream cheese on both slices of bread and sprinkle the cream cheese with cinnamon-sugar (how ever little or much you like) and "sandwich" the 2 pieces together.

Soak the bread in the egg and milk mixture for 30-60 seconds per side.

Sprinkle cinnamon-sugar on the outside of both sides of the soaked bread.

Top with butter and syrup!

Sara
Austin, Texas, United States
I am a native Texan and adopted Austinite. I've lived in Austin for 12 years and figure that is enough time to call myself one! I love everything that has to do with having fun in the sun. I love cooking, painting, trying new restaurants, and having a great time with friends!